I heard the rumors.

Something was going around at school. Also at church. They said it attacks like lightning and leaves you feeling like a grenade just went off inside your body. The only merciful part of the ordeal is that it only lasts for 24 hours.

Perhaps my home will be spared, I thought.

But then, last Wednesday, just after lunchtime, the school called.

It is never a good sign when the school calls. And somehow I knew before I answered what it would be.

It was one of my daughters. And she had it. (She will hereafter be known as THE FIRST, since she was the beginning.)

I went to the school and picked her up, spoke comforting words, and brought her home.

Later I waited for the bus to come, bringing home my younger kids. I waited and waited. Strange, I thought. This bus is never late. All of the sudden I had that terrible premonition again: the bus is late because of my child.

Sure enough, when the bus finally arrived and my younger two children got out, one of them shouted up the driveway, pointing to her brother, “Mom! Guess who just threw up on the bus!” (She will hereafter be known as THE TATTLER and he will be known as GUESS WHO.)

But I didn’t have time to answer her because just then, THE FIRST threw up again. She had almost made it to the toilet. Almost.

THE TATTLER and GUESS WHO walked into the house, and GUESS WHO told me, “Mom I’m not sick. I just don’t feel well.” After which he went to my bedroom and threw up on my gliding rocker.

I put GUESS WHO in the shower for safe keeping while I attended to the messes. Meanwhile THE FIRST was now curled up in a ball on the couch, while THE TATTLER  told me in detail about what happened on the bus. “We had to climb over the seats to get off!” But in less than an hour the dreaded plague hit her, too.  At least she made it to the toilet.

Now even I was starting to feel woozy. Would I be next? But I couldn’t get sick–I had a critical rehearsal that night in preparation for a huge multi-denominational concert and I was the director. My choir was not yet ready, and there would be hundreds of people in attendance. I couldn’t back out and no one could take my place. But how could I go when my children were unraveling before my eyes? My only comfort and hope was that soon THE SPOUSE would be home and he would be able to help me fight this battle.

In between washing and sterilizing and more vomiting (from all three) I went outside to get some fresh air and lo and behold THE SPOUSE rolled up in his truck! Salvation! He got out, his shoulders slumped, his feet dragging, his face as gray as a sidewalk. “I don’t feel well . . . ” he said.

So now there were four. If they were not vomiting they were writhing in pain or moaning into their pillows. At one point there was a line for the toilet.

Yet there was still one more child left to arrive home. When she walked through the door she gazed in astonishment at her deteriorating family.

“What’s up with everyone, mom? They all look sick.” (We shall call this child THE LUCKY, for the Black Angel of Gastrointestinal Rage had saw fit to pass her by.)

I could only give her a look of desperation and go back to my work of caring for the sufferers.

Finally the time came for me to leave for my rehearsal. I knew I needed Extra Help to get through this rehearsal, least I be victim #5. When I finally found a room where there wasn’t someone laying on a bed groaning I hit my knees and asked God to preserve me for the next two hours so I could direct this choir. After that He could do whatever He wanted with me. Just please help me make it through this rehearsal. I got up feeling a little better.

Now there was just one more thing to do.

I located THE LUCKY who was trying to escape the horrors of reality via a computer and headphones. I took her headphones out of her ears. I grasped her by the shoulders and looked into her eyes and I said:

“I am leaving. You are the only one in this house who can help people. You need to take care of everyone. If someone throws up while I am gone, you have to be the one the help them. I am counting on you.”

I conducted the rehearsal without an incident, though it went longer than I anticipated. Afterwards I thought I better go to the store and get Gatorade to help replenish dehydrated bodies. When I got back it was very late. As I turned off the car I sighed. I would have a lot to do when I walked in that door. I had left the house in shambles. I hadn’t fixed dinner (what was the point?) and I knew that dishes and cups and crumbs littered the counters. I knew I would have to start the laundry, especially if there had been more accidents while I was gone. I hadn’t eaten since breakfast. Miles before I sleep, miles before I sleep.

The house was dark and—mercifully—quiet. I walked into the kitchen and received the shock of my life: The counters were clean. The table was clean. The dishwasher had been emptied. The kitchen was spotless. Not only that, there was this on the counter: 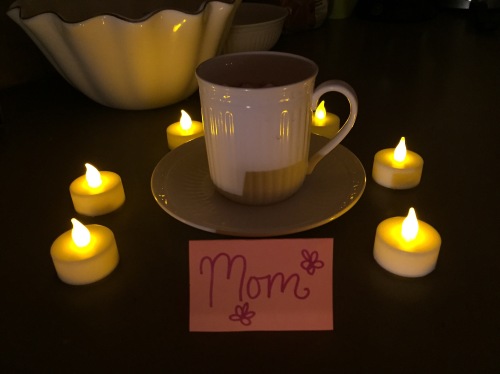 It was hot chocolate–still warm–covered in marshmallows. The living room had also been tidied and put in order. Had THE SPOUSE done all of this, even in the throws of his tribulations? Since my last memory of him was staring at the ceiling moaning, “Death come quickly,” that seemed unlikely. Did he somehow rally the other suffering souls into making an effort to clean the house?

I crept into the bedroom where THE SPOUSE was resting uneasily on the bed.

“Thank you for cleaning the house,” I said.

“The house is clean?” he croaked.

“No. But I know THE LUCKY was doing something in the kitchen for a long time. And when GUESS WHO threw up in his bed THE LUCKY took his sheets down stairs and put them in the washer and started it.”

As I lay down to sleep that night I couldn’t help reflecting how often we underestimate the potential of others. Especially those who are young. I have asked, begged and pleaded with children many times to clean this and clean that, watch out for your siblings and take care of each other, and there are times I feel like I am shouting into the wind. “Mother deafness” I think they call it.

But when a person, even a child, knows that they are depended on, that they are counted on, that all hope is riding on their shoulders, they find an inner motivation . . . not from obligation or force or even a sense of duty. But a motivation of pure love. That is when someone goes from being THE LUCKY to becoming THE HERO.