I am a fair-weather runner, which means I only like to run when it is between 50 and 65 degrees, with no rain or snow, no dogs, and no hills.

Until last year when my crazy runner siblings told me that we were all going to run a New Years 5K. That means you start your run sometime after 11 pm and you try to time it so that you cross the finish line at midnight. I will also mention that this 5K was in Idaho and it was 13 below zero. I am from North Carolina where it only goes 13 below zero every ten years. But I am all for trying new things. We dressed for the occasion.

Surprisingly, it was a great experience. And I thought to myself, if I can run in the middle of the night in Idaho when it is negative 13, I can run in any North Carolina weather. I need to stop being a pansy.

That sounds impressive, but it isn’t really. It is only about four miles a week. But that is the beauty of goals, isn’t it? A big goal is simply the sum of a bunch of tiny ones.

I bought new shoes, since if I was going to run 200 miles I wanted to be as comfortable as possible, and I made a card and taped it to my kitchen cabinet so that I would be reminded of my goal.  Every time I ran I marked how many miles I went. As the year progressed things were going pretty well. Slowly but surely the tally marks increased.

But then I got sick . . . for the entire month of October. This put me behind, and I agonized that I would have to make up all of that running during the coldest months of the year.

By the time November came I still had 30 miles left to run and I was doing everything I could to catch up. My 6-foot 17-inch African brother who came for Thanksgiving said, “I’ll go running with you and help you catch up. We could 10 miles in one day.” Ha, ha, dear brother.  Remember you are from Kenya, where running was invented.

Instead I had him run with my husband so that they could wear each other out.

Then a week or so later my husband asked, “How many miles do you have left?”

“Oh, that is easy! That is a little less than a marathon. You could do that in three hours.”

But I was making progress, even if it was little by little. By this time I was running very regularly and I felt better than ever. The time I spent running became a sacred time to think and problem solve and to watch the stars.

Plus, it felt so satisfying to watch the tally marks increase on my card.

By the second week of December I had six miles left. Ironically, it was the week my husband surprised me with a 15th anniversary trip to the Bahamas.

So guess where I ran my last six miles.

(We didn’t actually run on the beach. We ran on the roads, but this makes a better photo.)

It was a perfect ending to my year of 200 miles. I started in frigid Idaho and ended in the breezy Caribbean. 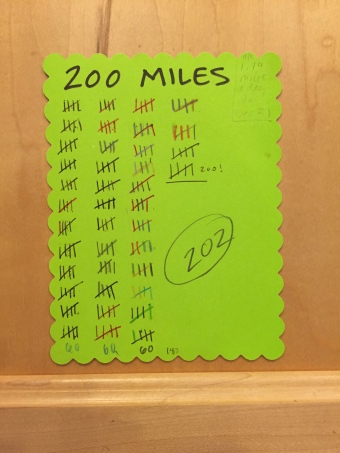 Now what to do this year? My running sister told me I should run a 10K. I told her I would do that if she memorizes the first 10 amendments to the Constitution. A kilometer for an amendment. She said she would think about it.

We’ll see who is the most ambitious. And, in the end, the most rewarded.

Now the question is whether or not I will go running tomorrow morning . . .