A Letter From an Apostle

First of all Scott and I discovered we were expecting our first babies. Yes, babiez.  Then Scott got accepted to a PhD program that was 2,000 miles away (2,103 miles, to be exact). I would leave my full-time library job and all my friends and family in Utah and move to North Carolina where I didn’t know one person in the entire state, and become a full-time mom to twins.

Job change, place change, role change, life change! So exciting! We did not see it as something that would be hard, we saw it as an adventure!

But an unwelcome change was also on its way.

It was during this period of transition that Elder Neal A. Maxwell, one of the living twelve apostles, came to visit our ward (congregation).

Now, for those of you who are not LDS, this is a very significant event. Since we believe in modern-day apostles this is like having Matthew, Mark, Luke, or John walk into your church service.  Usually the only time we get to see or hear the apostles is twice a year at a big mega-conference that is broadcast all around the world. Each apostle is loved and respected, and the sounds of their voices are as recognizable to us as the voices of our own family members.  This particular apostle, Elder Maxwell, was coming because his granddaughter was in our ward and her son was being blessed, and by some miracle I was asked to give the closing prayer. I lumbered up to the stand with my big twin-belly, gave the prayer, and felt pretty exceptional that I was within winking distance of an apostle.

Soon after that my life took a most unexpected, untimely and unwelcome turn. My father passed away. Yes, you know him. My dad: the firework salesman. The builder of log homes. The creator of Him.

Now all those happy changes we were looking forward to suddenly darkened. My father would never see my babies–neither the two I was carrying or any more that would follow–and I was moving away from a mother who needed me about as much as I needed her.

The next week we travelled up to Idaho for the funeral. The day we got back to our apartment we checked our voice mail and heard a familiar voice:

“Hello? This is Neal Maxwell. I hope I have the right number. I’m trying to reach Chelsea Dyreng. I heard that her father passed away and that she is having twins soon and she moving across the country, and I thought I would call . . . “

Scott and I looked at each other, our eyes humongous. We checked the next message:

“Hello? This is Neal Maxwell . . . again. I’m still trying to get a hold of Chelsea Dyreng. It sounds like you have a lot on your plate right now. I’m sorry I missed you . . . “

I was totally disappointed that I had missed my one chance to speak with a living apostle, so I immediately sat down and wrote him a letter (this was back when people wrote letters), a letter that ended up being much longer than it probably needed to be. But I had to write and tell him all about my dad.

Then, a week or two later I received this in the mail: 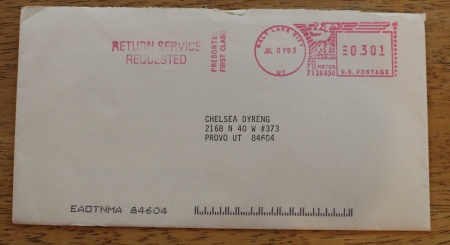 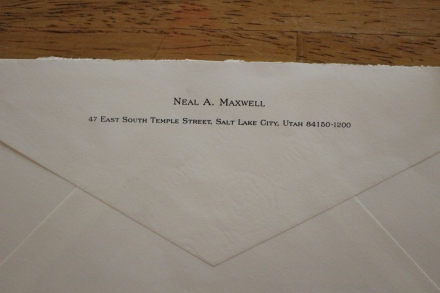 His letter was wonderful and sincere. How exceptionally kind it was for him to go out of his way–an elderly man, a cancer survivor, a man very busy with many other responsibilities–to take a moment to acknowledge my grief! What was I to him? I was just another church member, one of millions. He didn’t have to do anything for me, there was no benefit in it for him. But he persisted, not just calling me, but leaving multiple messages and then answering my long, circumlocutory letter with a compassionate letter of his own. Who does this? 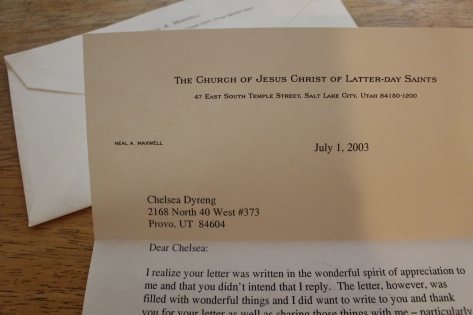 In the Bible Jesus Christ designated twelve men to be his apostles. Their primary job was to be special witnesses of Christ.  It means that they have a duty to tell people about Him. The word apostle means “one who was sent.” It means that they spread the good news and they act in the name of Jesus Christ, doing what he would do if he were here.

Elder Maxwell passed away a year later. He was 78 years old. I can picture him up in heaven, meeting my dad and telling him, “I already know everything about you, thanks to your very thorough daughter.”

By seeking to comfort an insignificant pregnant woman in mourning, Elder Maxwell gained nothing . . . except a true and loyal follower.

I know I am not the only one who has had an experience like this. If you are LDS I bet you have a story, too. The apostles are always saying good things about us . . . let’s return the favor.  #imetanapostle 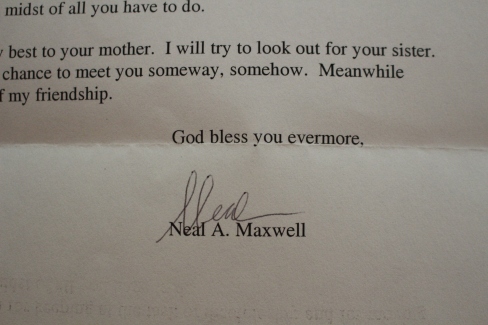