Home School, Bribes and a Ghost!

This has been a great week, if you don’t count the ghost.
But first I’ll tell you about school.
I started “school” with my kids and is how it goes: We sit down at the kitchen table and I pass out their journals. They spend some time writing about a topic that I have chosen for them. Then we do math, then penmanship, then some vocabulary. And then school is done!
This takes about 8 minutes.
As you might guess, my kids are loving this school. But I’m afraid their teacher is lacking. I have decided that my music/English degree did not train me for this and I am having a hard time coming up with meaningful projects. . . Naomi’s current project is to draw and identify every plant in the back garden.
But good news–! I found out that two of my kids will get into Oxford schools! Sophie and Syrena have been accepted into a very good school . . . and they will wear UNIFORMS. When I broke the news to them, Sophie and Syrena, who had been bubbly ever since we got here, became graveyard-silent. They didn’t laugh for 24 hours. We went to London the next day to sight-see and they walked around all day as if they were on their way to the gallows. There is a lot going on in those two heads right now. 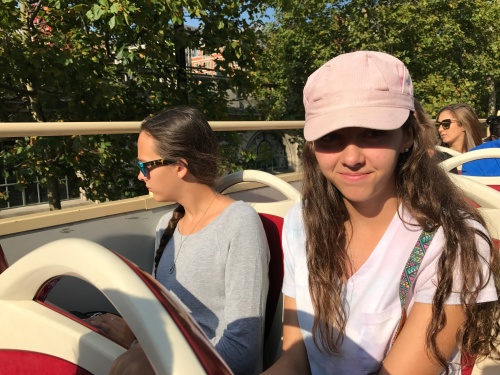 I think that if those two made it into school the others have a good chance, but we shall see. I will have a more clear picture this week. I don’t think Chelsea’s 8-minute school will last forever. . . but Naomi has already identified two plants!
Now . . . about the ghost.
Remember I told you that my closet door keeps opening when my back is turned? Well, so does an attic crawl space door above Naomi’s bed. At night. And it creaks.
Not only that, but a couple days ago I was on the phone and I heard a tremendous crash. Not just one crash, but a series of crashes. It sounded as if someone had fallen down the stairs with a mirror. But no one was on the stairs (either stairs) and nothing seemed amiss in the house. Danny thought it might have happened outside, but no one was in the alley. It was a mystery . . . until we went into Syrena’s room. And there, in a catastrophic heap on the tile floor, was Syrena’s collapsed desk and all of her books and pens and pencils and a broken mug.
No one was in the room when it happened.
At least no one . . . living.

And speaking of living, on goes the struggle to keep my boys alive. I decided that boys are born without a common sense gene. I’m sure they develop it later, but they are definitely NOT born with it. Somehow they can’t comprehend that every time we go out for a walk we are inches from death with all the zooming cars. Scott keeps reminding me that the cars are only going about 20 miles per hour, but to me that is fast enough.
Since the boys still resist holding my hand I have resorted to bribery. I keep a package of Skittles in my pocket, and every time the boys willingly hold my hand to cross the street I put one in their hand and say “thank you for holding my hand.” It is working grrrrreat. I make sure Sophie and Syrena also have skittles in their pockets.
Of course, Scott doesn’t need to have any skittles because the boys *love* to hold his hand. Grrr. 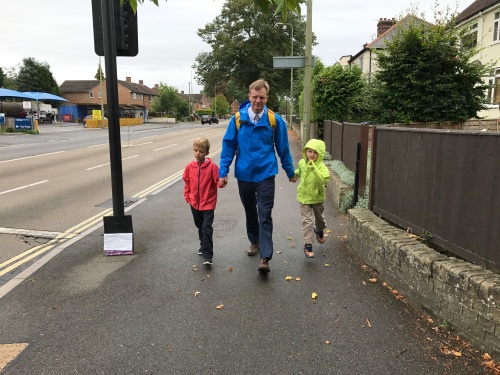 Here is a parting shot of a street near our home and one of the sweetest kids I know: 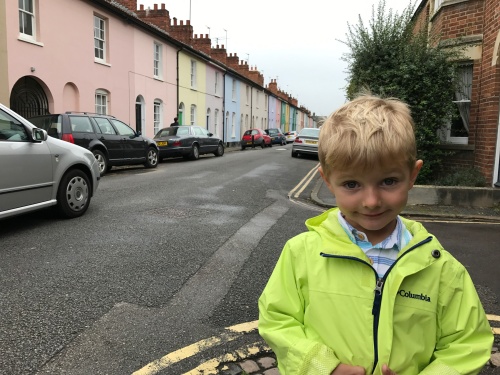 7 responses to “Home School, Bribes and a Ghost!”